Bats appear to have a very resilient immune system. Australian research suggests their immune system is turned on all the time, unlike in humans only when it is being attacked. This would result in highly inflammatory autoimmune diseases in humans, but not in bats, suggesting their response to pathogens is much more rapid than for us. Certainly this bears out in our practice at the Bat Hospital, we rarely get sick bats coming in from the wild. We have had a couple of flying foxes with cancers, but our work is almost always with trauma and tick paralysis.

Apart from White Nose syndrome in USA, bat health only really comes into focus when diseases spill over into humans. Most of these diseases, except for rabies and lyssaviruses, are viruses that bats live with quite happily but have extreme consequences for humans. There is now an avenue of research that is asking how bats can live with these viruses and what can we learn from them that will promote human health.

There is considerable agreement amongst epidemiologists, human and wildlife health professionals for a policy of ONE HEALTH – the collaborative efforts of multiple disciplines working locally, nationally, and globally to attain optimal health for people, animals, plants and our environment.

“From a paper by Andrew Breed, Hume Field, Jonathan Epstein and Peter Dalzak ‘Emerging henipaviruses and flying foxes – Conservation and management persepctives’
Outbreaks of previously unknown viral diseases with wildlife reservoir hosts are part of an important phenomenon for public health and conservation – disease emergence. Emerging infectious diseases (EIDs) are defined as diseases that have recently increased in incidence, impact or geographic range; have recently moved into new populations; or are caused by recently evolved pathogens. Like most infectious diseases, EIDs represent a complex interplay between host, environment and pathogen, and their emergence is usually multifactorial.

‘For example, burning huge areas of forest to make way for farmland is normally seen as an environmental and economic concern. That action may displace a wild animal species, which comes into contact with and infects a domesticated animal species, creating a veterinary problem. The domesticated animal then enters the human food chain and infects people, and a new health threat emerges’. (Wikipedia)

Why does it seem there has been a sudden emergence of infectious agents connected to bats? These viruses have coevolved with bats and circulated for thousands or even millions of years within bat populations. Only recently, as humans increasingly disrupt ecosystems especially through land clearing, have these agents reached a tipping point of spillover into new host species. Some, like Hendra, may have been infecting horses for some time but been mis-diagnosed, until horses began infecting humans. 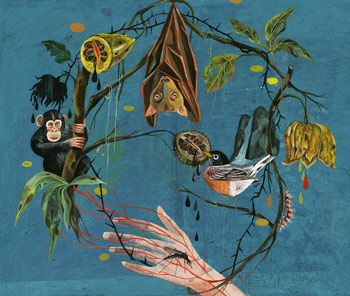 It is important to keep all risks in persepective. Note the average number of deaths in Australia from flying foxes in this table is less than one per year. Horses are by far the most dangerous animal in terms of number of deaths.

The chance of contracting ABLV or Hendra is extremely low, but the consequences are very high. Both diseases are nearly always fatal, and both are notifiable to Health Departments.

Education is the key to removing risk, not the culling or dispersal of flying foxes. Both diseases are preventable in humans:

ABLV Do not handle bats, if bitten or scratched gently wash the wound immediately with soap for 5 minutes, apply iodine and seek urgent medical attention. For more information.

Hendra Virus Always maintain good hygiene standards around horses, ideally stable them at night, keep them away from trees that attract flying foxes and keep their feed covered. Stay away from sick horses, and call a veterinarian immediately.

For information on the safety of living around flying foxes.

The One Health Initiative

We have provided various samples from both microbats and flying foxes to researchers into various disease aspects:

Murdoch University. Investigation in tick-borne diseases in Australia. We provided paralysis ticks that had been removed from Spectacled flying foxes in 2014.

Biosecurity Queensland. Since early 2014 we have been sending all dead microbats to the ABLV WEDPP project. To date only 2 variants of ABLV are known in Australian bats, one specific to all 4 species of flying foxes and one in a microbat, the Yellow-bellied Sheathtail (Saccolaimus flaventris). The main aim of this project is to detect more variants of ABLV in microbats, probably with species-specific relationships within some or all microbat species.

Macquarie University. We collected faeces samples from all 4 species of Australian flying foxes for this project in early 2015. It is looking at the risks of reverse zoonoses in flying foxes (diseases spread from humans to flying foxes) and coupling this with looking at parasite diversity and co-infection.

Australian Animal Health Laboratory In 2012 we collected bat flies and ticks from flying foxes for research into the role they may play in disease transmission.