Bruce and Ann Johnson identified the tick paralysis problem in 1990, though there were reports of unexplained deaths in 1986. They set up the first bat hospital at Whiteing Road followed closely by Pam Tully at Zillie Falls in 1991 and lastly at Tolga by Jenny Mclean in 1997. The 4 maternity camps in the wetter Tablelands were unoccupied from 1998 to 2002 and so the first 2 bat hospitals ceased operations. The flying foxes returned to Whiteing Road colony in 2003, but abandoned it again after Cyclone Larry in 2006. We did the searches in the intervening years, but in 2010 the SFFs set up a new maternity camp on Malaan Rd, only about 1 km from the Whiteing Rd camp. This camp is now occupied every year during pup season with at least 20000 bats. Thankfully it is on land owned by bat-friendly people. Other camps where we have done flying fox colony searches over the years have been at Lakeside in Yungaburra and Powley on Lake Tinaroo.

We start opening up our tracks for colony searches in the Tolga Scrub in September. This can be a lot of work especially if the Little Red flying foxes have been camping there in large numbers during the year. Their preferred roosting very closely together often puts too much weight on branches, causing a lot to bend and eventually break. This in turn opens up the canopy and allows various pioneer plants to establish such as stinging trees and wait-a-while. We rarely encounter snakes, but often large  Golden Orb spiders have made their webs across our tracks. Tolga Scrub is Mabi rainforest with sometimes a thick understory. There is a lot of wait-a-while (Calamus sp.) in the Tolga Scrub and paralysed bats often get entangled where usually they would not. Flying Fox colony searches involve looking up as well as on the ground for affected bats. Tick paralysed mum with pup, about to be injected with tick anti-toxin in the colony. If injecting on your own, the stick can help delay movement by the bat and prevent you being bitten. Most bats lie quietly and do not seem to notice the intra-peritoneal injection. We mostly do this treatment back at the hospital these days. 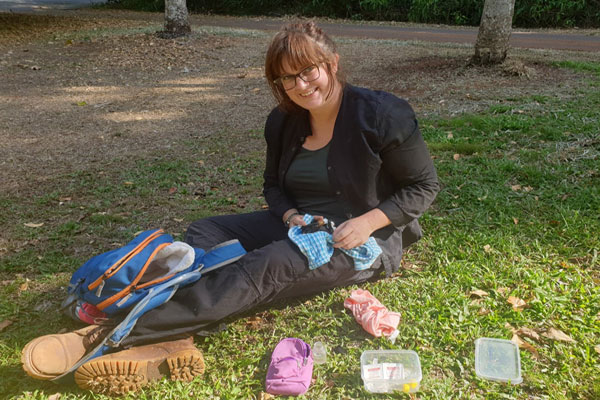 Hannah stabilising a spectacled flying fox pup on the grass beside the colony. For flying fox colony searches we wear long sleeved tops, long pants and closed boots to do searches. Any stinging trees near our tracks get spray painted fluoro pink to remind us they are there. The slightest touch to any part of this tree can leave you in pain for days and reminders of it for months. Real contact with it will put you in hospital for pain relief. Many of the bats we find on the flying fox colony searches are gasping badly. They have a poor prognosis and are euthanased at the camp. The babies stay settled best if we leave them on their dead mum until we get back to the hospital. If you look closely, you’ll see an unengorged paralysis tick on the large pup’s upper arm. We usually find a few pups each year with tick paralysis. All pups coming into care need to be checked for ticks. It can be easy to mistake them for batflies (Nycteribids). 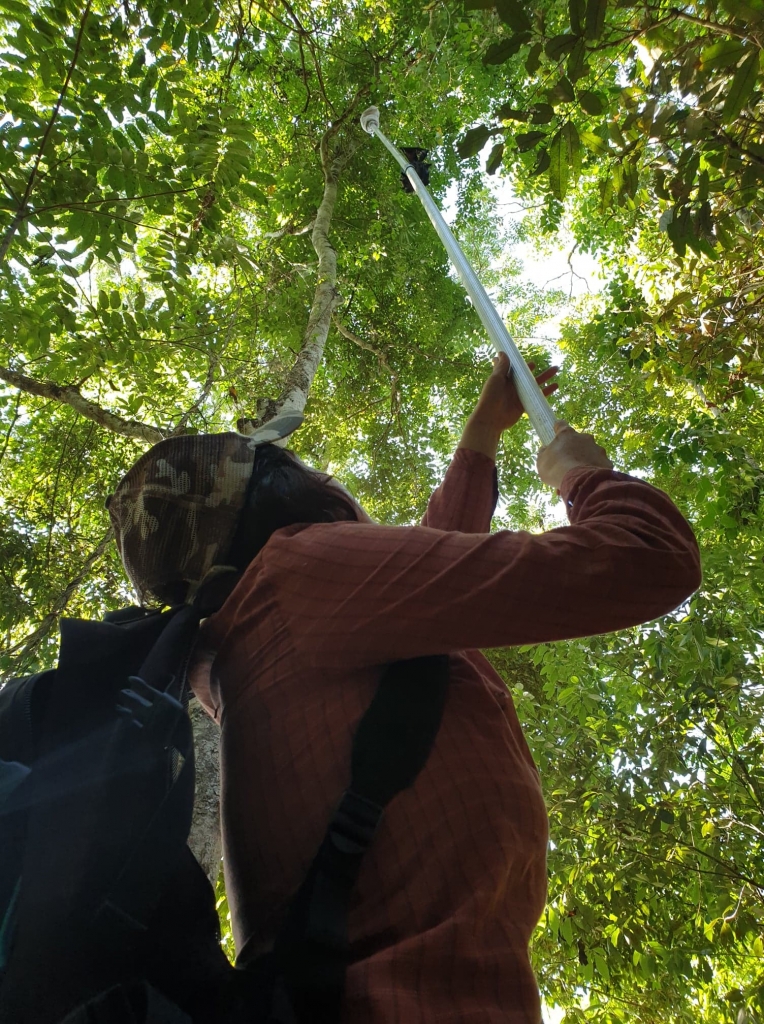 We do a lot of pole rescues for pups but also tick paralysed bats caught in wait-a-while, a thorny climbing palm. Sometimes we need to use the pole while standing on a ladder. We have a flying telescopic ladder that is easily carried into the thick forest. 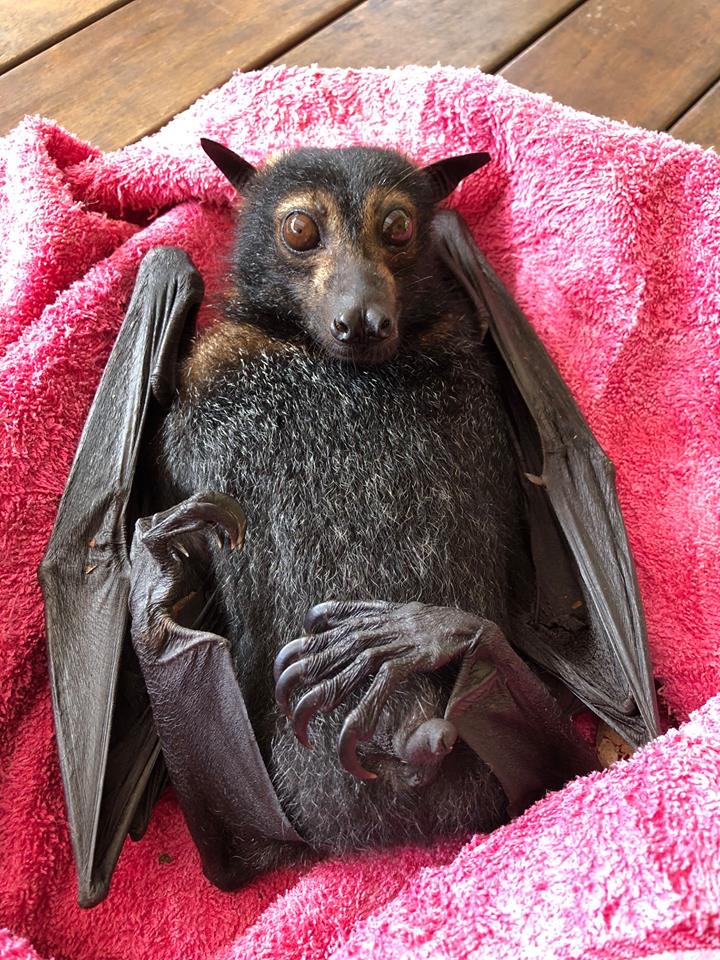 When approached properly most of the paralysed bats remain quite relaxed. This is very important as stress will only accentuate gasping. A good approach is to bend down quietly rather than loom over the animal, talk calmly to it, avoid direct eye contact, bribe with juice if their ability to swallow allows and move slowly. 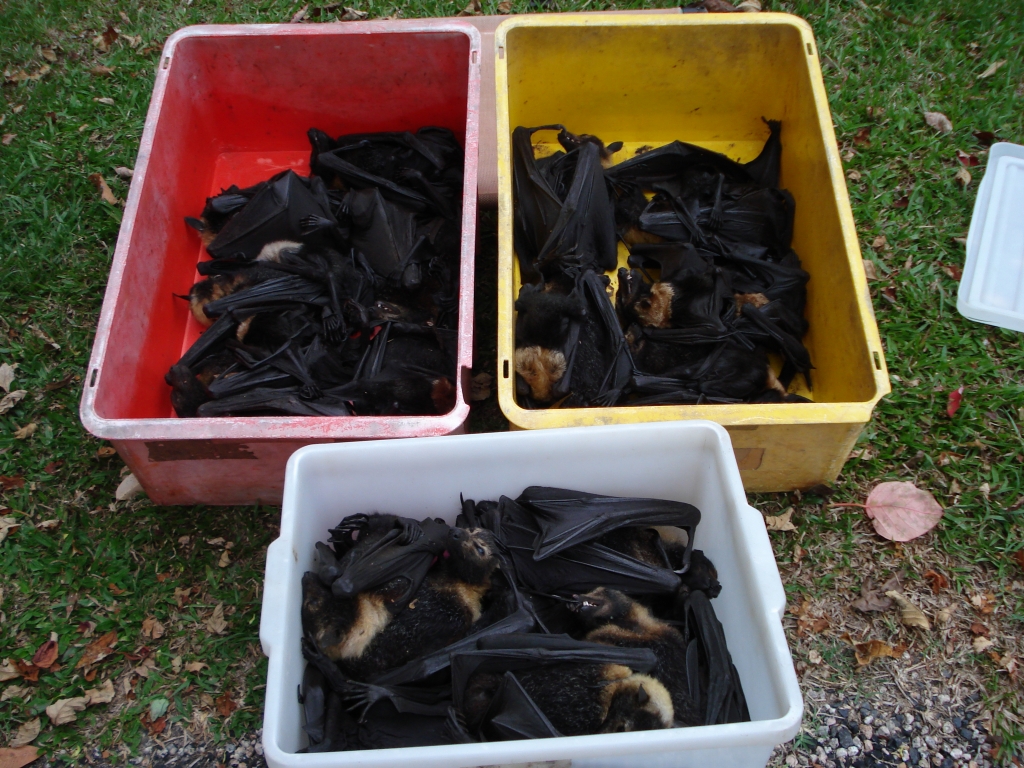 A bad day on the colony search. Some years there are a lot more animals affected than others. 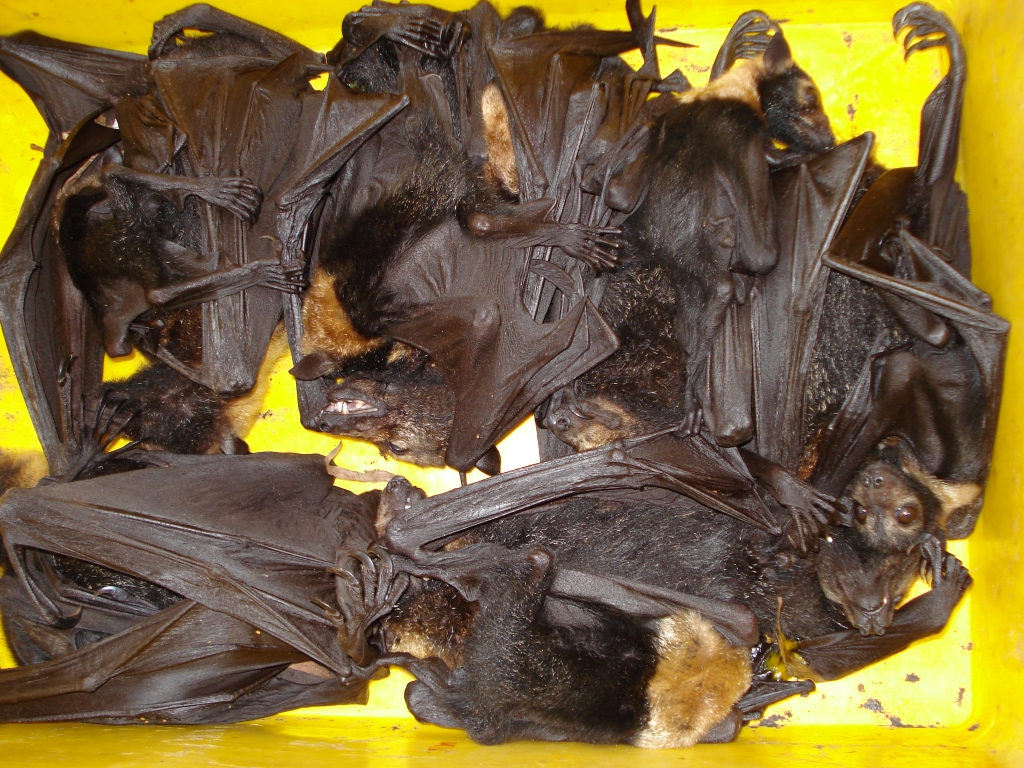 Same bad day on the colony search. We usually keep the pups on their dead mums as they remain calm until we get back to the hospital.