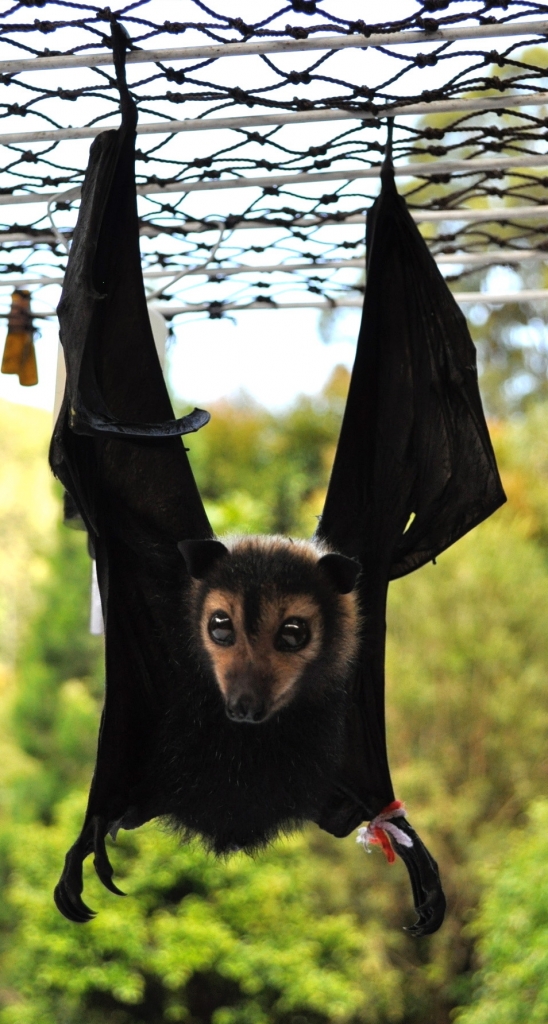 Young pups invert to toilet from an early age.

We get up to 500 Spectacled flying-fox pups through the hospital during tick season October to December each year. Some come in from mothers electrocuted on powerlines or entangled on barbed wire fences, a few are found alone on powerlines, though we don’t know why, but most come in because their mothers have been affected by tick paralysis.

These are the months we are most in need of volunteers. The young are breast-fed by their mothers for 5-6 months. We initially hand-feed them with a bottle and teat, or syringe and teat, but from about 1 month of age they feed themselves from dripper bottles. Thankfully! There are a range of milk powders that Australian flying-fox carers use.

The wild pups are unable to get fruit until they can fly at 3 months of age, but carers generally start to introduce fruit at about 2 months. The orphans are soft-released from early February once they have reached a certain size and weight. We support feed them in the forest for several months. Each year we have pups released in previous years coming back to the release cage, so we know that what we do works. We’ll never know what proportion of pups survive, just as we don’t know what proportion of wild pups survive.

Flying fox pups that come in healthy are very easy to rear once you know how. The most difficult aspects are having the right teat and right size hole in the teat, and how to deal with pups that want to suck on other pups (usually an ear). They are programmed to suck on their mother’s nipple for 6 months so it’s not surprising that we encounter this problem, albeit in numbers a lot less that could be expected.

It takes a whole year for a female flying-fox to produce an independent juvenile. She will be lucky if she has 3 pups in her lifetime, since most adults are dead by 6 years of age in the wild. Once a flying-fox species is in decline, it takes a long time for the population to recover. Spectacled flying-foxes are currently listed as Vulnerable to extinction, but CSIRO data from the last 10 years has shown a further 50% decline. They are now likely to be listed as Endangered by the Australian Government.

Back to our bats
More Flying-fox Orphans

We provide a soft release program for the pups…

These young Spectacled flying-foxes have been moved from the Nursery to the outside cage. They are now 8-10 weeks of age, and will moved down to our large flight cage by 12 weeks.