Spectacled flying foxes are not appreciably different to care for than the other 2 large species of Australian flying foxes. The captive care of orphans is covered comprehensively in other sections of this website. Captive care of adults is discussed under the following headings:

The best housing will depend on why the animals are in captivity. All options must keep the bats safe in terms of injury, predators, ease of access for the carer and ease of cleaning.

Bats in the acute stage need to be kept in our hospital section indoors or in the lower sections of our outside cages so they can be caught easily for medications, dressings etc The hospital is mainly for animals who are sick (rather than only injured) such as those with tick paralysis, dehydration and recent surgery. We much prefer to manage most bats outdoors where they can be social, get sun etc It is vital that animals requiring rest are not put in a cage large enough to allow them to fly if they get frightened or alarmed. This can easily happen by activities in their new surroundings such as cleaning of cages.

Our Treatment Cage has a feeding area that is 1.5 metres by 1.5 metres (Inside Treatment), connected to an outside area 3m by 2.2m (Outside Treatment). We can close the 2 areas off from each other or not. Initially we keep short-term care bats in the feeding area. Normally we’ll add a hanging towel to give the feeling of an even smaller space and block out from their field of view from human activities. Once they are used to how we present food and their surroundings we’ll open the hatch between the 2 areas and they can move freely between the two areas. Sometimes we need to have a group of bats in each area and keep the two areas closed off from each other. The two areas have some roofing for protection from rain but allows for a lot of sun as well. While in this area the bats can have a lot of social interaction with the bats free in the flight cage. If there is only one bat in this section we consider putting them in a bedroom section of the main feeding area of the flight cage. This gives them the safety of social interaction without being mobbed by all who want to know them by smelling.

Once they have recovered from the acute stage of their condition the flying foxes are promoted to one of the two flight cages, the large flight cage for permanent care bats on the Exhibition Permit, or the smaller one for the rehabilitation cage for bats that will be released. These bats are fitted with a velcro collar so that we can find them again. We write on the collar who they are. These are often bats with wing membrane damage from barbed wire that requires time to heal (e.g. large holes and tears) and while it is healing it is optimal that the bat can fly as much as possible. Since September 2020 we now have the small flight cage as well.

These bats must be able to be independent inside the large flight cage. They must be able to climb up to the top of the 6 metre high cage, and down again to eat; to groom and toilet themselves and not require active medical management. We monitor them when they come down to eat, and do an annual checkup for weight and hygiene issues. The main problems we find are joint and wing contractures secondary to their injuries and the occasional mild fungal/bacterial wing infections. Once used to living at the top of the cage they are highly resistant to being kept in a lower treatment area.

We enjoy designing bat cages and welcome helping those looking for ideas to build their own.

This bat lives outside the cage with no housing. It has enough flight for a soft release. 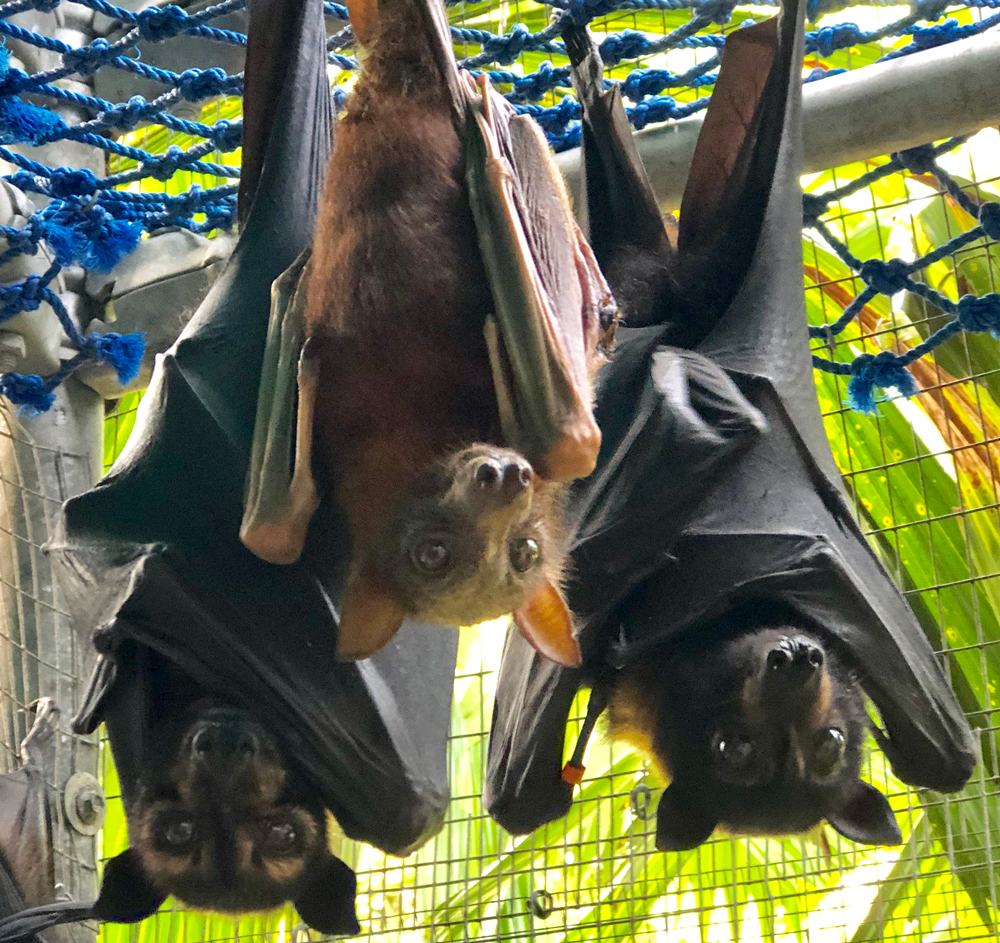 Flying foxes need sun, protection from extreme heat (and cold) and a feeling of safety that comes with the option of roosting at a reasonable height out of the reach of humans. All our outdoor cages give the bats a choice of being under cover or out in the open. With climate change and increasing temperatures, the cages all have sprinkler systems and the large flight cage also has shade cloth on top of the plastic cover.

Flying foxes need other flying foxes with which to socialise while in captive care, but there are age/gender/species considerations. Young pups are solely with their mother until about a month of age, at which point they are with their peer group at night when the mother goes out to feed.  After weaning, it is normal for juveniles in the wild to roost with their peer group (other juveniles) until about their third year when they integrate fully into the adult life of the camp. So juveniles in captivity need other juveniles, and adults other adults. Mothers with pups normally roost with other mothers, and in captivity a gender balance of 6 females to 1 male is considered a healthy balance. There are several places in the wild where all 4 species of Australian flying fox share a camp (Ingham and Finch Hattan in Queensland) so keeping different species in care together is not an issue. Little Red flying foxes like to roost together in clumps most of the year, and so they in particular need their own species. The other 3 larger species hang singly and I feel it is less important, but definitely preferable, for them to have the company of their own species. I have seen Little Reds in our cage cuddle up to other species of flying fox even in the presence of other Little Reds. There will always be individual friendships and preferences to take into account as well.  For all these reasons I believe that flying foxes in permanent care need a minimum size group of diverse ages to thrive. Permanent care animals can be important socially for sick or injured animals in short-term care.