There are several aspects to releasing orphaned flying foxes. They include:

Orphans are taken out to the release cage in groups of 20-30 and kept inside the cage for 3-7 days depending on a number of factors eg weather, ability to have the next group of pups ready. It’s long enough for them to get used to the different sounds and smells, as well as the presence of the wild bats. We release each group in the morning, and then bring another group out that afternoon. We believe the presence of the orphans inside the cage encourages the released orphans to return, as well as the presence of support feeding. This timetable of release is based on the fact that our creche cage is huge  and our release cage is small. For a group where this is opposite, it makes sense to have more pups in the release cage and for a lot longer.

Compared to the wild pups, our hand-reared pups are really social misfits when released, even if they’ve shared a cage with adult flying foxes. Integrating into the social structure of the colony at that stage means hopefully being with the wild pups at night. Wild pups are still with their mother during the day, until weaned at about 6 months. Best case, the orphaned pups fly out with the wild pups, learning about bush tucker and gaining the strength/endurance for long-distance flight. The pups generally stay with their peers until their third year when they integrate fully into the adult life of the camp.

Proximity to a reliable flying fox camp is essential. Tolga is occupied all year round most years and our release cage is in the forest within 0 to 100 metres of the wild bats. The last group of bats is taken out in April so that there is at least a month before the numbers of wild bats dwindle over winter. The last group of orphans is the smallest and most vulnerable group. We lower our ideal size of orphan at this stage to a minimum of 140mm forearm. It means that every year we need to hold over a few that were born very late in the season.

Daily feeding is continued for at least a month after the last orphans are put outside. The food is then reduced. They are fed less frequently as well as a lesser amount. Often in June we will still go out once a week and have 30 or so bats come down to the cage. The success of the release is evident by the numbers of orphans from previous years returning to the cage, as well as some microchip returns.

Read about our release cage. We initially used a large dog crate winched up into the canopy as we were worried about the security of the site. But after many years with no problems and increasing numbers to release we built a ground cage. We initially had two verandahs on the cage, but added another two for our peak release of 750 pups in 2019. 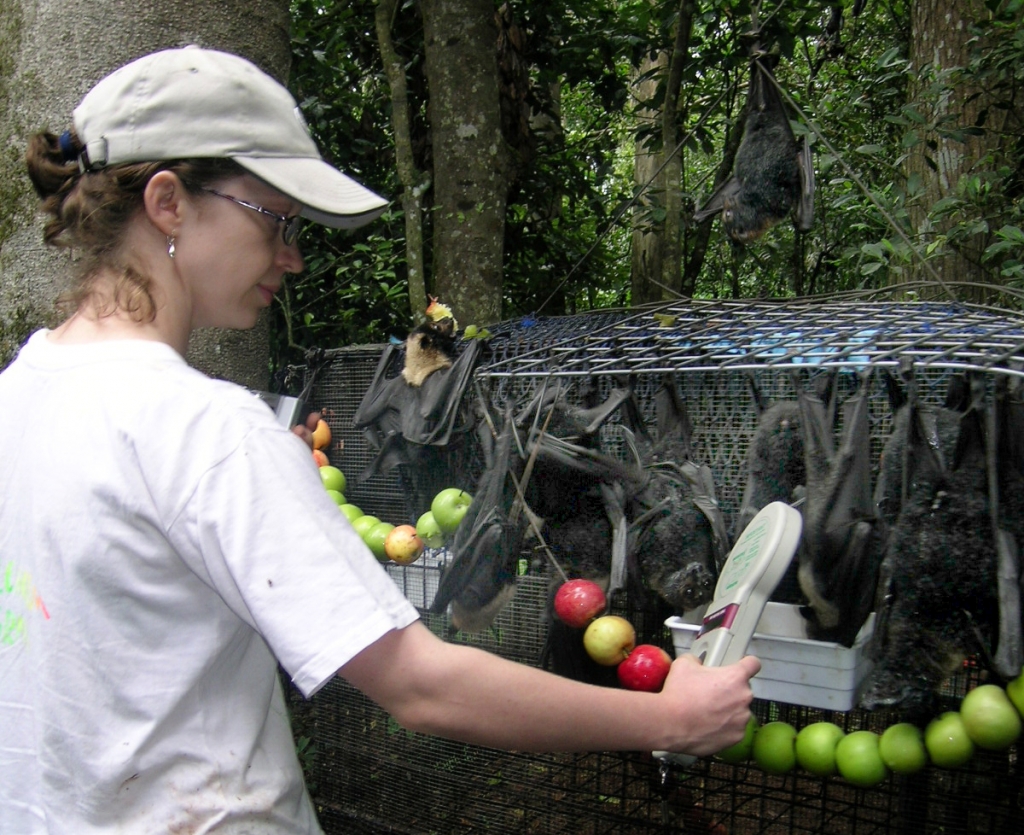 Photo: (above) We scanned pups returning to the cage for support feeding for the first few years. This showed that 90% returned at least once. We had a pup released in 2001 who was found on a search in 2002 with tick paralysis. She had only been recorded once at the cage, yet had survived 9 months in the wild. She recovered from the paralysis to be released again. 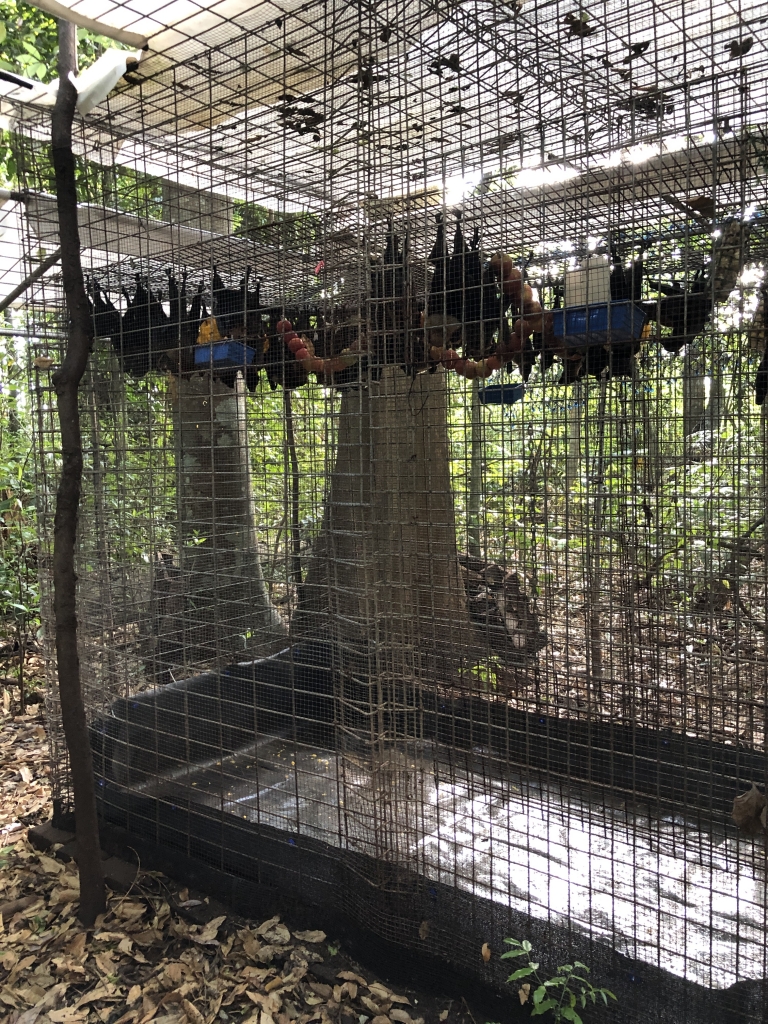 Our release cage has a number of features. The floor is cut-to-size waterproof shadecloth, with grommets around the edges so they can be held up forming a shallow swimming pool. We squeegee up the waste and discard it in the forest. There is usually enough wetness from the wet season rain to have an OK non-slippery floor, but every week we take the floor home to clean properly. We have two  floors so this is easily done. Note the white plastic roof, for shelter from rain but also to make it easier for the pups to find the cage in the forest.

Watch the pups flying /climbing to the release for support feeding.

Watch the pups feeding at the release cage.