Paralysis ticks (Ixodes holocyclus) are killing hundreds of Spectacled flying foxes (Pteropus conspicillatus) on the Atherton Tablelands every year, from about October to December. The ticks rarely affect flying-foxes elsewhere in Australia despite the distribution of both ticks and flying foxes down the east coast as far as the Victorian border. The numbers coming into care vary each year, depending on a number of factors:

There are potentially 5 or 6 choices of maternity campsites for the Spectacleds on the Atherton Tablelands during tick paralysis season. Most are in the higher altitude wetter parts of the Tablelands and one in the relatively drier part of Tolga. They will usually establish themselves at 2 or 3 of these campsites by the middle of October, and leave sometime after the babies are independently flying. Tolga is the exception, it is usually permanently occupied throughout the year.

The Little Red flying foxes (Pteropus scapulatus) often camp at Tolga Scrub during tick season but are rarely affected, despite roosting lower in the trees. It seems the ticks are being picked up at feeding sites rather than roosting sites. Cathy Eggert in her 1994 honours thesis titled ‘Is tick paralysis in the Spectacled flying fox related to a change in their foraging behaviour ?’ suggested that the ticks may be picked up in wild tobacco bush, Solanum mauritianum. An attempt by Peter Brice to prove this in 1997 was unsuccessful. Together with Dr Andrew Dennis from C.S.I.R.O we successfuly proved the relationship in 2001 with a grant from the Natural Heritage Trust. 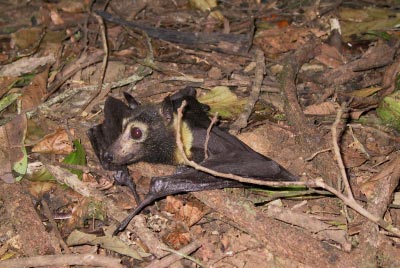 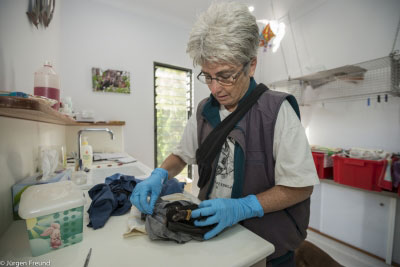 The basic steps involved in the treatment of tick [...]